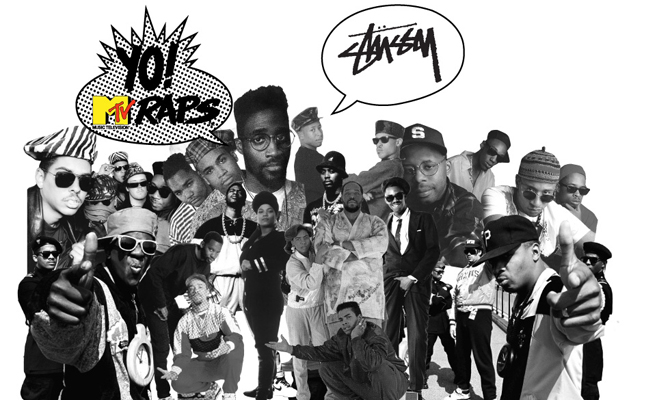 In honor of the 25-year anniversary of Yo! MTV Raps, iconic streetwear brand Stüssy has teamed up with Yo! to commemorate the show’s impact on hip-hop culture.

Yo! MTV Raps transmitted the culture of Rap to millions of homes at a time when there were only a handful of local outlets to see a rap video. The style, the trends, the language of Rap began to influence popular culture and by the time the show left the air in 1995, the genre was no longer the best kept secret.

For me Yo! MTV Raps was important as its was THE programme that introduced American Hip Hop culture to the living rooms of the UK. We all religiously went round the house of our only friend with Satellite TV, Sky or BSB or whatever the funk it was called back then and sat there in awe watching the birth of what would become the biggest music scene in the world. It was the Only place that had up to date cutting edge goodness from the Golden Era. It brought a new, vibrant and underground art form to a Global audience.

We were actually… All watching

Part 1, The Importance of Yo! MTV Raps, takes a look at the history of MTV’s groundbreaking music program.


Part 2, Fashion in the Golden Age of Hip Hop examines the trends and styles from that era and how they changed the world.


Check out Stussy’s site to check out their collection of Yo! MTV Raps gear.