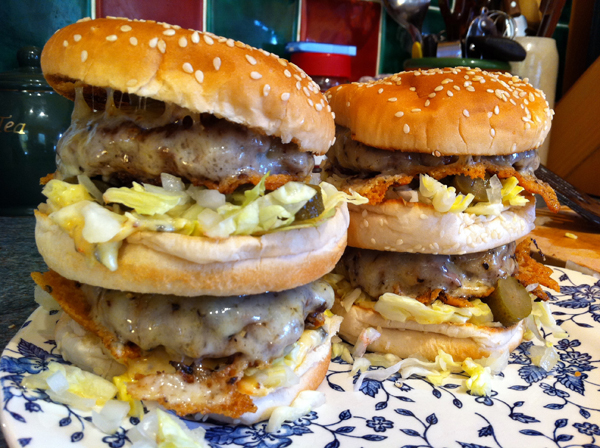 I’ve had this link from ‘The Burger Lab‘ bookmarked for ages to blog on here and tonight I finally got round to making my own Big Macs.

Ok so the Burger Lab blog post is pretty detailed on how to get a authentic Big Mac but i’m just going to wing it a bit with stuff I have in the fridge so lets get cracking.

Heres what I’m going to be working with… some lettuce, gerkins, burger buns, 4 aberdeen angus burgers some cheese and pepper slices, sweet chili sauce, grainy mustard, mayo and some onions ooh and a lil turmeric.

First up the sauce. I don’t know ratios or weights and that, I basically got a big spoon on mayo, diced up a few gerkins, dollop of mustard, a big old squeeze of sweet chili sauce and a sprinkle of pepper. Give it a stir and there you have it… tastes proper lush!

I’ve sliced up some lettuce, diced up some onion and got the buns ready so its time to cook up the burgers.

I’m going to do mine on the griddle as I can’t find the frying pan, but I cant see it making much difference.

While there cooking I’ll sort out the buns and get building the homemade big mac. The buns were toasted quick and then a spoon full of awesome sauce was added to each bun, layer of lettuce, sprinkle of onion then a scattering of gerkins.

Now this bit gets a bit messy, in hindsight I should of probably grilled the cheese or something after the burgers were cooked as it all melted onto the griddle. All good tho as its made toasty cheese haha.

Right so everythings cooked up its time to add it all up… and sweet jebus there MASSIVE!!! haha I have no idea how I’m going to eat this but I’ll give it a go.

These were freaking lush, massive, yet lush. I should of probably only made the one rather then two as I am now sprawled out on the sofa having a food whitey.

Well worth making tho, so now there is no need to stagger into maccy d’s at 3am and slur some gibberish at the counter staff until they give you food to get rid of you. You can now go home and make your own, just don’t burn down the house!