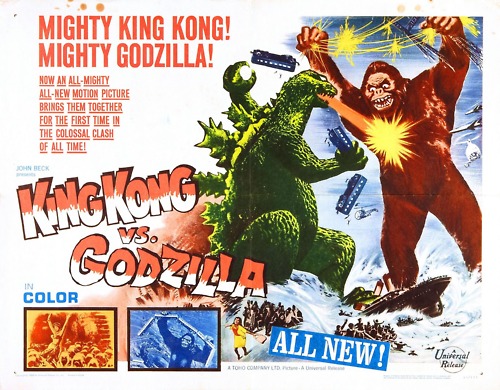 Now we’re talking King Kong vs Godzilla (1962), how can this film fail?

Godzilla returns after a 7 year break/hibernation (If we remember rightly he was frozen in ice at the end of the last film, Godzilla Raids Again) and in full colour to kick some King Kong arse! They even throw in a giant Octopus for a laugh as well, which is always cool as Octopuses are awesome!

And what a fight, its freaking mental! Godzilla should be able to whoop Kong easy and it is sort of a one sided fight. Godzilla even gets to the point where hes using his tail to bury Kong in rubble while setting him on fire, but then BAM! Kong gets hit by lighten which makes him more powerful or something (I’m pretty sure there was a plot device mentioned about this earlier in the film, but its subtitled so I wasn’t paying much attention) then the madness begins. The highlight being when Kong grabs a tree and shoves it down Godzillas throat.