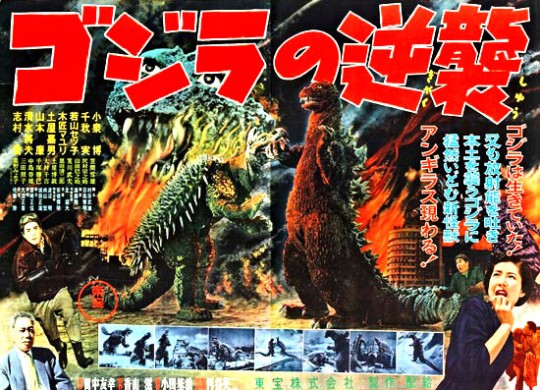 So then on to film number 2… Godzilla Raids Again (1955), or as the Americans re-titled it ‘Gigantis The Fire Monster’ the morons.. its not Gigantis its funking GODZILLA!!!

Anyways this is the first Godzilla film to pitch him up against another giant monster, this time with Anguirus, so it sets the precedent for future Godzilla movies where he trashes cities while fighting massive monsters, funk yeah!

Again its slow to start and it takes forever till Godzilla and Anguirus duke it out, but when they do its hilarious. The footage is sped up, for some reason, and so looks a lot cheaper then the original Godzilla film.

But with all sequels, bar a few exceptions, this film is ok but not awesome, worth a watch I guess but dont bother getting the USA version, go for the subtitled original.