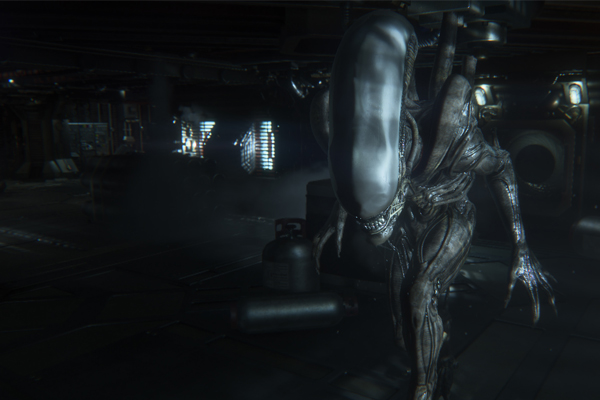 
Summer’s over, which can only mean one thing – sitting at home with the heating on playing games all winter, rad! So first up for the OMC mini review we have Alien: Isolation.

This game is AMAZING!

Without a doubt this is the Alien game we have all been waiting for. Set after the events of Alien, you play as Ripley’s daughter trying to find out what happened on the Nostromo from the first film.

Visually, the game is spot on, from the retro 70s-esque computers you can log into on the ship to the whole ship decor and atmosphere… it’s like being in Alien and it just adds to the tense game play. It’s not just the look of the game, but the emotion and the pacing… it’s a slow burner with panic-induced moments. In fact, everything about this is proper next-level rad!

It’s less of a ‘kill everything that moves’ shooter game and more of a ‘shit! shit! shit! run, hide and hide some more’ unless you want the Alien to rip you to shreds.

So sitting on my sofa with my cat, Jones, we played non-stop for about 20 hours, freaking out and getting proper scared. Tense doesn’t even come close to the feeling of playing this. Proper edge-of-the-seat panic is aided by the fact there’s no auto saves in this game and the save points are few and far between. It perfectly captures the fear and tension evoked by Ridley Scott’s 1979 classic film.

I can’t recommend this enough. Even if you only have a passing interest in the Alien(s) films this game is so worth buying.

There are flaws, but only minor ones, so screw it – this game gets the OMC seal of approval with 10/10!